For the first time since last July I HAVE A NEW PAPER TO WRITE ABOUT! It shouldn’t be that exciting because (1) it isn’t made of chocolate and (2) it’s on a fairly niche issue in evolutionary ecology, but after a year largely spent writing for (and failing to get) grant money, it’s nice to have something new to blog about…

Our work addresses the issue of how environmental conditions influence evolutionary change. For evolution of a trait (say, beak size) to occur, two conditions are usually required: that the trait is under natural selection (i.e. associated with fitness) and heritable (i.e. is influenced by genetic effects which are passed from parents to offspring).

However, when we measure selection, heritability and evolution in natural populations, we often observe strong selection (e.g. individuals with bigger antlers have more offspring), strong heritability (e.g. a substantial amount of the variation in antler size is due to additive genetic effects), but NO EVOLUTION. In other words, although the conditions for evolution of antler size are met, we see no change in antler size across time. This is the ‘paradox of stasis’.

(L) Male red deer with larger antlers have greater reproductive success and antler size is heritable. Despite this leading to an expected increase in ‘breeding values’ for antler size across time, (R) breeding values have remained unchanged. Figure from Kruuk et al 2002.

One explanation for this paradox is that organisms live in environments which are constantly changing. From year-to-year, for example, there may be changes in climate, competition, predation, food availability and so on. As very neatly described (but by no means initially suggested) by this paper, if genetic variation and selection vary across environmental conditions in a certain way, this can constrain evolution.

An illustration of how a negative correlation between the strength of selection and genetic variation across environments can constrain evolution. In both of the example scenarios, evolutionary change is small because of a lack of either genetic variation or selection.

Barely any of these studies also measured selection, so couldn’t determine whether evolution should be constrained or sped up by changes in genetic variation. For two exceptions, here’s a paper on birthweight in Soay sheep and laying date in great tits; you’ll notice that they’re both in the excellent PLoS Biology, showing that this question is maybe a big deal after all!

In our paper, we wanted to show how selection on and genetic variation in six different traits measured in wild Soay sheep changed with environmental conditions. The Soay sheep live on the island of Hirta in the St Kilda archipelago and have been intensively studied since 1985. There’s more about the sheep over on the study systems page, but if you can’t be bothered with that, here’s a nice view of the study area and some lambs:

We took six different measurements from sheep captured 1988-2011: body weight, leg length, horn length, horn growth, testicular circumference and parasite count. Some individuals were captured many times over the years; many were captured just once. As a measure of environmental conditions, we used population density. This is essentially a measure of competition: in years when there are more sheep, conditions are worse because there’s lots of competition for food and individuals lose weight, get infections, and are more likely to die.

As expected, we found that all traits were under selection: individuals which were bigger and have fewer parasites were more likely to survive and reproduce in a given year. We also found that selection on most of the traits was stronger when population density was higher. For example, at low population density, fitness increased relatively slowly with increasing leg length; at high density, fitness increased more rapidly with increasing leg length:

Estimated annual fitness (show as numbered contours) at different combinations of leg length and population density. The actual data are represented by red points for females and blue points for males. Selection is stronger at high density (e.g. 600) since as you move from left to right (i.e. as density increases) you pass through more contours (fitness increases from 0.1 to 0.9) than at low density (e.g. at 300 fitness only increases from 0.5 to 1). 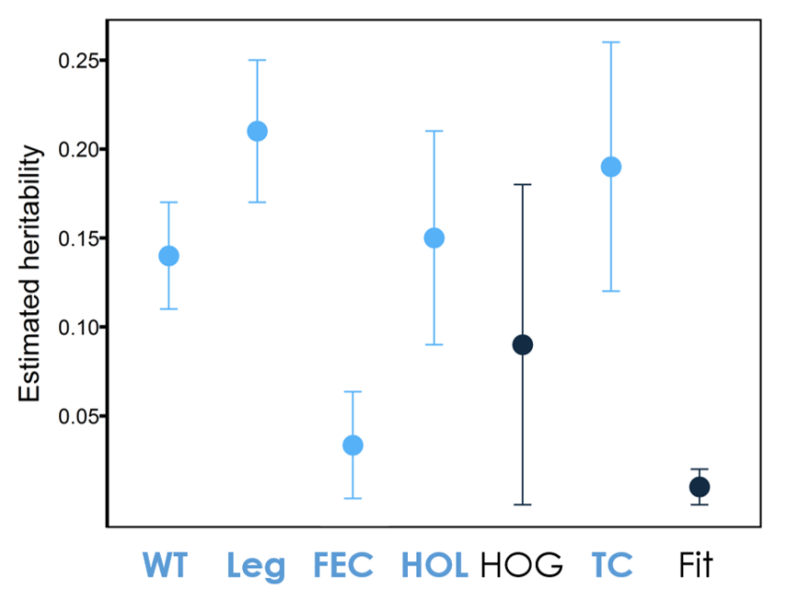 We then looked at how the genetic effects changed with population density, using random regression models (nicely explained in the supporting information of this article). Aaaaaand…we basically found that genetic effects didn’t change with population density: essentially, genetic variation was the same across all environments. The large table of statistical estimates needed to illustrate this is just too exciting to handle and we didn’t draw a graph, so here’s a handy illustration: 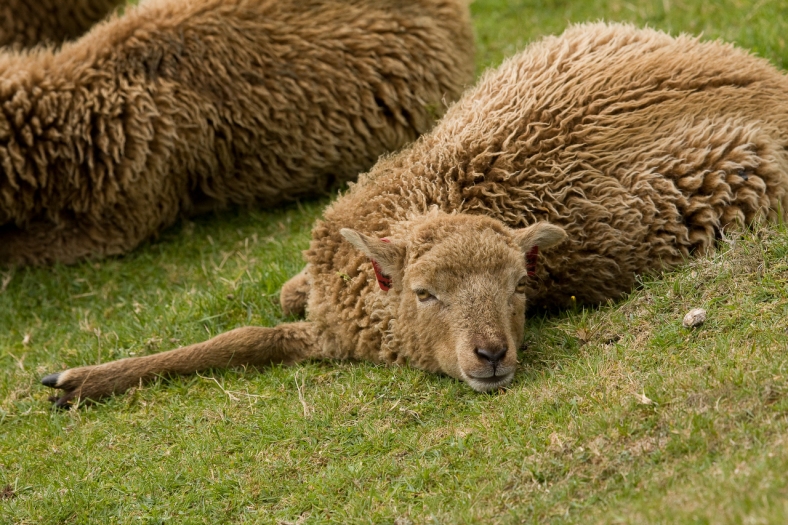 On learning of the results of the study, Village Bay’s spokesheep gave the reaction of the community as a whole.

What do all of these (possibly slightly deflating) results tell us?

The most useful result of this paper is the stark contrast it offers with the results of decades of lab and field experiments which show that genetic variation always change with environmental conditions. If you grow plants which differ genetically (‘genotypes’) in different environmental conditions in a greenhouse, a genotype which does well under one set of conditions will often do badly under another set. Similarly, if you take plants of the same species from different locations and swap them (in a ‘reciprocal transplant’), the plants will do worse in an alien environmental than in their home environment. In other words, they find that genetic effects change across environments:

The studies of Clausen, Keck and Hiesey in the 1940s provided some of the first evidence for changes in genetic effects across environments. They transported ecotypes of the same plant species across three sites separated by hundreds of miles and thousands of metres in altitude and observed variation in the performance of the different ecotypes and their crosses. From Clausen et al 1941.

We didn’t. This may be because we measured changes across environments in which the sheep have evolved: even though high density is generally bad, they’ve been adapting to this environment for several thousand years. High density is not that bad, compared to moving a plant hundreds of miles from its home, or into a totally different greenhouse at the drop of a hat: such big differences in environments may explain why experimental studies are more likely to find effects. We also studied individuals within a single natural population, with natural levels of genetic variation, rather than inbred lines in the lab, or from different locations, with more contrasting genetics. Again, this makes it more likely that experimental studies will detect effects, while studies of natural populations will find it harder.

None of this means that changes in genetic effects with environmental conditions aren’t an important force in evolution. It just means that measuring them in natural populations is bloody hard.