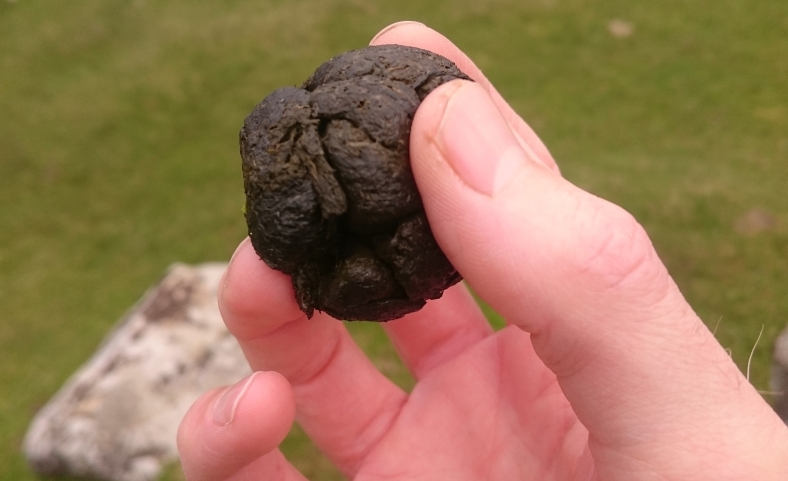 Well, that went quickly. When I wrote my last post, I’d done a week of fieldwork and was just beginning to feel that I *might* not totally screw it up, and here we are: four weeks later, all done, all back and wondering what the hell just happened.

As a quick recap, I was on St Kilda, collecting faecal samples from female sheep in the weeks leading up to and followign the birth of their lambs. And why would I do such a perverted thing (a very reasonable question which EVERYONE asked)? I’m interested in how physiology and resistance to infection changes when individuals are making the huge effort involved in reproduction. This involved lots of wandering around in weather of varying foulness, identifying individual animals by their ear tags, very inconsiderately watching them pooing, then collecting the samples and getting them back to the freezer quickly. As the season wore on, I got to know many of the animals very well: what they looked like, where they’d be, and whether it would be easy to get a sample from them. There was the elusive BW153, who I saw in the first week and then never clapped eyes on again; BL226, who diligently produced twins in the middle of the season, raised them impeccably and obliging provided a sample every time I spotted her; and BL057, who could be recognized at a great distance and always provided a sample, though only after a sustained period of stalking. A phrase I thought I’d never use, but that also goes for ‘very inconsiderately watching them pooing’. As you may have gathered, this post is going to be low on scientific intrigue.

The sight of a bloke standing and staring at grazing sheep amused many of the tourists and employees working on the radar base on the island, but I managed to convince myself that I was doing work which required a great deal of skill by making a list of my methods for getting a sample from individuals I was targeting:

2 and 3 were unsuccessful, 1, 4, and 6 were very unsuccessful, and 5 and 7 generally elicited stern looks and contemptuous urination in my direction.

A sheep not doing a poo. Typical.

Anyway, the final score in all of this was 269 samples collected from 55 different females, with 34 sampled at least five times and many sampled six times.  This was as good as I’d being assuring people that it would be, and better than I’d secretly hoped for: it’s given me a nice spread of data from before and after the birth of the lamb, with many females sampled from a few weeks before to a few weeks after lamb birth. I’m not going to lie: it was a massive relief! As I went, I divided every sample into four: one subsection was used to count worm eggs in each sample while I was on the island; two more were stored at -20C for later analysis antibody and (funding-dependent) hormone assays; a fourth was stored at -80C for (funding-dependent) gut microbiota analysis. So…I have some data on changes in parasite burden during pregnancy and lactation, with more (hopefully) to come soon! 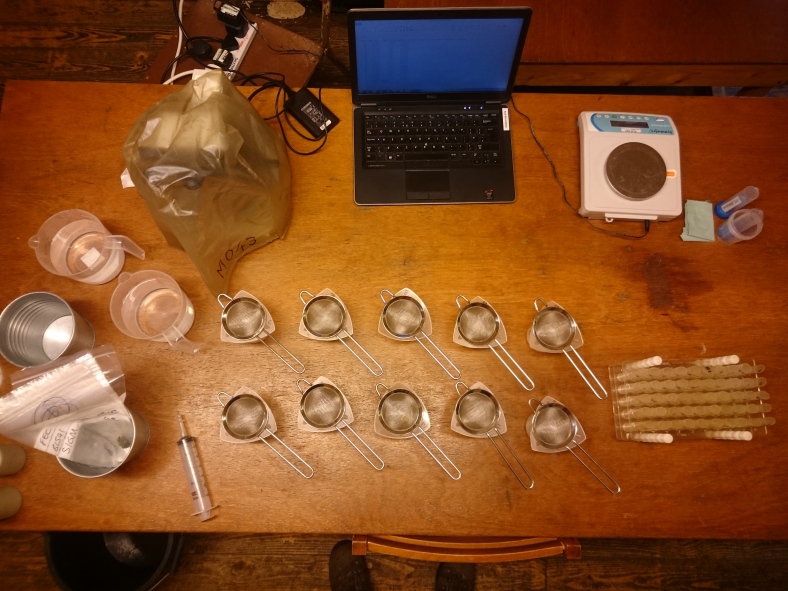 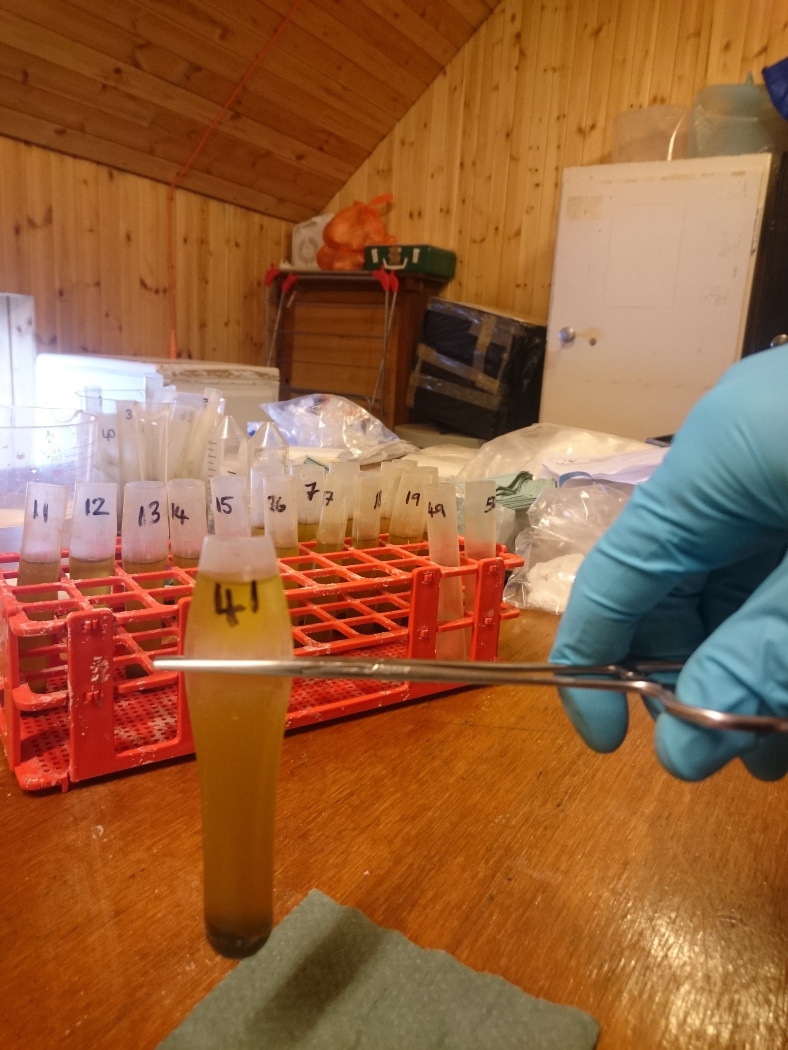 Floating worm eggs in salt solution and trapping them for counting. Not visible: worm eggs.

Getting creative with my samples before storage (i.e. going insane after four weeks). This one’s going into the -80C freezer for future analysis of gut microbes.

Overall, I had a great trip. There were lots of great people out there doing other things; I went for a few lovely runs; there were vast quantities of biscuits. As fieldwork usually is, it was intensive: I was in the field or the ‘lab’ (or kitchen, as discussed last time) between 8 and 6 every day, with two half-days off for the whole month. As a colleague said, ‘you can be a dick to yourself when you’re your own boss…’. Normally I try to work a reasonable day, but I do like to have evenings and weekends off (and I bloody well hope you do too), so this was fairly intensive. I didn’t really think too much about this at the time, because I was essentially walking around a lovely, wild place for a month, which is exactly what I’d do if I had a month off. On the other hand, I didn’t really have time for any of the other work I had planned to do, like the paper I had to revise or the book chapter I had to prepare. Or, to put it another way, I decided that recharging by playing cards or reading a book after dinner was a better use of my time than two hours’ frustrated groaning over reviewer comments (OK, they were actually pretty helpful).

The lovely, wild place I was in for a month. It snowed. Did I mention it snowed? It also rained, hailed, blew a gale, and was sometimes even sunny. On the same day, naturally.

I did feel a certain amount of guilt about this at the time, but then I remembered this post about the ‘cult of busy’, which gives some excellent advice about how to use time more effectively. In the article, Natalie Cooper compares academics to the Four Yorkshiremen in the Monty Python sketch, competing to explain just how terribly busy they are. In this world, everyone works 8am-6pm, breaks for dinner and is still answering emails at 11. Everyone wants to contact them at all times because they’re so desperately needed. Of course, this isn’t just true of academics. Nevertheless, the article has lots of good tips on how to be a bit more efficient and reduce one’s general workload and stress levels, which can only be a good thing.

The ranty bit of this is that I really wish that more folk, from PhDs to PIs, and in every place I’ve worked, would spend more time on activities which are seen as ‘not real work’ but which are great for themselves, their colleagues and their department in general. For example, some days I might spend the morning reviewing an exciting paper by a lab doing very similar and interesting (and usually better) things than me, chat to a friend about their data over tea, then go to a seminar about something totally unrelated to my interests, but which may have an engaging speaker whose style I can learn from or who has cool stats that could be useful one day. I mean, I haven’t done any ‘proper work’ and shit, that deadline is a day closer, but that person will have their review back (and I’ll have read a cool manuscript); my  friend will have a sounding board for their ideas (and I’ll have looked up an interesting new way of analysing zero-inflated data); the speaker will have had a decent audience (and I’ll have learnt how to use blank slides in a talk). All in all a pretty good day. To this end, I’m making an effort to be as efficient as possible in order to leave more time for these other (equally important) activities. I also genuinely think that many (probably even the majority of) people DO see things like this and see their reviewing, chatting and seminar-going as vital parts of being an academic. I just wish we’d admit it to ourselves and our colleagues more often!

Rant out. Was that a rant? Did it have a point, or was I too polite? Never mind. Let’s recover with a nice picture of a lamb: 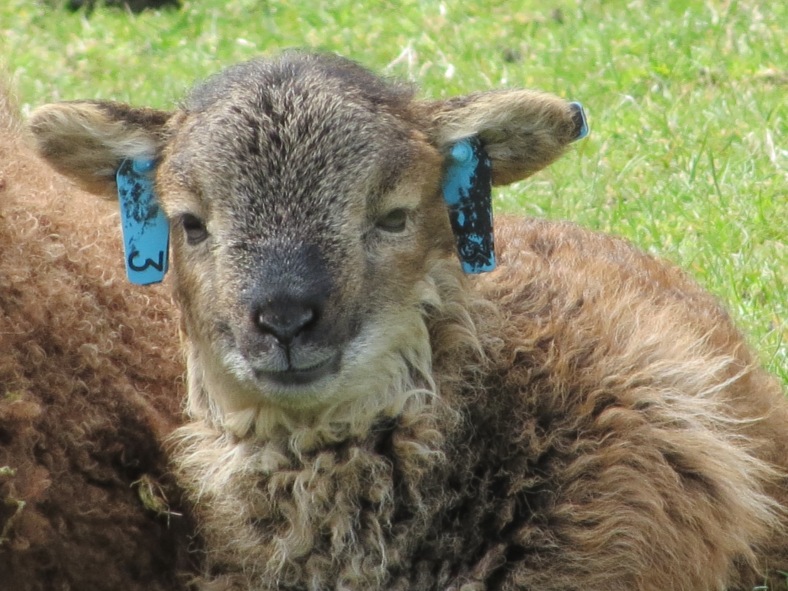 To finish with, I should probably talk about some science. Trouble is, it’s been a little while since I’ve thought about anything other than fieldwork. I have a lot of labwork to do in the next few weeks in order to measure antibody levels in the samples I collected. This is going to build on this paper by Kathryn Watt from Edinburgh, who determined the relationships between antibodies measured in faecal and plasma samples collected at the same time. They found that parasite-specific antibody levels in plasma and faeces were significantly correlated, though not strongly. A very cool finding was that faecal, but not plasma, antibodies were associated with parasite egg counts. This suggests that measuring faecal antibodies could better reflect what’s actually happening at the site of infection (the gut) better that antibodies in the circulation. Kathryn is going to be teaching me how to do these assays, so I’m learning from the master!

The negative relationship between two faecal antibodies (IgA and IgG) specific to the parasitic worm Teladorsagia circumcincta and worm egg counts in samples collected in August 2013.

I’m also in the latter stages of a manuscript attempting to test the ‘cohort morbidity phenotype’ hypothesis, which is an interesting explanation for recent increases in lifespan: that reduced infections in early life have decreased levels of chronic inflammation and delayed the onset of diseases like heart disease, stroke and cancer. Hopefully more about that soon. Lastly, I’ve got a book chapter to plan. Oh no, and I have a quantitative genetic analysis to do.