I’ve recently been invited to give a problem session for third-year undergraduates at the University of Nottingham, which is incredibly pleasing because it’s for a module I did in my final year as an undergrad in 2005. Anyway, I’ve also been invited to give a seminar while I’m down there, which made me wonder….how do I make it a really good one?

This is a ‘full-length’ talk, rather than a conference presentation of one paper in 15 minutes: great tips for shorter talks and general presentations can be found here, here and here….though beware that this last one is itself a 45-minute talk on how to do a talk!

I’ve done longer-format talks before, but thought I’d ask for some advice on whether my ideas about a good talk are the same as everyone else’s. These days, when I have a problem I ask Twitter:

which as you can see, like most things I post, didn’t generate many retweets, but luckily did generate lots of answers. What follows is a series of tips from the people who replied, which I’ve shamelessly stolen, twisted, collated and presented as ALL MY OWN BRILLIANT IDEAS.

As an early-career researcher, I don’t actually have all that much to talk about- I haven’t been researching a problem for 20 years. People suggested speaking about 1-3 different things/questions/papers, providing it finishes well inside the allotted time. No-one likes a speaker who drags on, and everyone likes time for questions/discussion/the pub/picking the kids up/catching the bus.

Cramming tons of data into the talk means less time to explain the context or the significance of what you’re showing, which means people will inevitably lose interest and stop listening. Rushing through another set of results, no matter how interesting they should be, won’t do them justice. I often have a few slides in reserve after the end of the talk, like extra figures or tables, to show if people want extra details.

Imagining I’ve decided what 3 things I’m going to talk about (I haven’t), how do the audience want me to structure it? Everyone agreed that it was a good idea to spend quite a lot of time explaining the context and key concepts of the study. Where they differed was in how that time should be distributed: some suggested spending a third of the talk setting everything up, while others suggested doing a mini-introduction for each section. I prefer the this latter approach: it breaks the talk up into more chunks: three five-minute introductions and three five-minute results sections sounds a lot more appealing than a fifteen-minute introduction and a fifteen-minute meander through a series of graphs. ‘A conversation with the audience’ was a nice phrase offered to me:

Speaker: ‘We did this work and we found this- isn’t this great?’

Prof in third row, surreptitiously to colleague who invited speaker: ‘Pah! They didn’t even mention the possibility that X….’

Speaker: ‘Of course, there remains the possibility that X. In the next section I’ll introduce X, and then show how we thoroughly tested for X.’

Prof in third row, surreptitiously to colleague who invited speaker: ‘Are there any more spaces left for dinner this evening?’

Apparently during teaching, the attention span of students is around 20 minutes anyway: 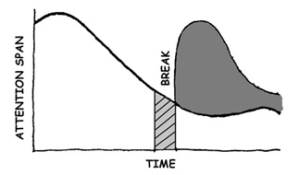 so it’s a good idea to have a bit of down time between sections so the audience can recuperate.

I want a story…

…was definitely what many people asked for from a good presentation. People suggested it was a good idea to talk about one area or theme: for example, I use data on humans to test totally different hypotheses to those I test in sheep, and I’d never mix the two in a single talk. A sound structure could well be:

(If this led to other things we didn’t understand, repeat 1-4. If we now understand everything/ran out of time, proceed to 5).

The main challenge of speaking for ~40 minutes is keeping the audience interested, and that means everyone, not just the big Profs who you might want to impress. A great tip was that no-one ever walks out of a talk thinking it was too simple. That means pitching the talk so it’s not just followed, but deemed awesome, by a new PhD student or someone from outside your field. Explaining the key concepts properly and emphasizing why the work is interesting and important is essential to demand everyone pays attention to the rest of the talk.

Deciding how to explain the methods is tricky. Some people suggested spending a long time explaining them, while others thought that going light on detail was better. An overview (‘we measured antibody levels with a standard assay’ or ‘we accounted for this thing in our models’) may be better than gory details. A nice suggestion was to pre-emptively invite people who wanted to know exactly how you structured the heterogeneous residuals in your multivariate random regression (or whatever) to ask you in the pub afterwards.

Everyone agreed that a similar philosophy should apply to the results. Probably my least favourite thing in talks is to see people presenting graphs without explaining what they show- even to the extent of not labelling the axes, which I get very annoyed about.

For goodness’ sake, label your axes.

One suggestion which a lot of people gave was to bring the graphs up piecemeal. Displaying the axes without the data will allow the audience time to see what’s going on, before the data are added. A flood of information for 40 minutes is a lot to take, which is why a lot of people suggested giving the audience breaks. A nice tip which was offered was to hit ‘B’ or ‘W’ in Powerpoint/Keynote to take the presentation to a blank black or white slide, and hitting it again to go back to your slide. Apparently the way to do this if you’ve got your presentation in PDF format is to have a blank page at the end, hit ‘End’ to display it, and then hit ‘Alt + LeftArrow’ to go back to your slide.

Finally, 40 minutes is a long time. How the hell do you remember everything you need to say? Many people suggested that since the start and end of the talk contain the really key points, and this is when the audience is most awake, these should be the most memorable parts of the talk and where you have to say the right things. This means that these should probably be the best-rehearsed sections, though no-one advocated scripting the whole thing. For the rest of the talk, I try and at least know what the first things I’ll say for each slide is- the rest should just roll straight out. People suggested using a little text (e.g. the title of the slide) or the main picture/graph as a cue for each slide. Scripting and learning off-by-heart is not only very difficult for a longer talk, it also makes for a bizarre delivery style which makes the audience feel uncomfortable, and the possibility of total meltdown if you forget your lines.

I still have no idea what I’m going to talk about…but I do have an idea of how I’ll go about it! This is thanks in large part to Ben Dantzer, James Gilbert, Lilly Herridge, Andrew Jackson, Susan Johnston, Rob Lanfear, Ben Longdon, Tim Lucas, Kirsty MacLeod, Joel McGlothlin, Hannah Mumby, Luisa Pallares, German Orizaola, Eleanore Sternberg, Michael Whitehead, Isabel Winney and Tom Webb, who all tweeted me with their tips and experience as speakers and audience members alike.