Conferences come in all shapes, sizes and guises, with ‘a day or several days of talks in one place’ being variously described as a conference, meeting, workshop or symposium (is there a distinction between them?). The biggest ones will allow you to see the greatest variety of talks, and probably allow you to meet the largest number of people, but like many people I find I get the most enjoyment and stimulation out of the smaller ones.

Reasons why are outlined eloquently here, and a survivors guide to succeeding at conferencing can be found here, but these for me are boiled down to a generally more relaxed schedule (e.g. compare the stressful hordes at Glastonbury to the cheerful aggregations at End of the Road) and the ability to have a greater quality of conversation with folk. Anyway, the main point is that last week I went to Newcastle for the 2015 Scottish Ecological Ageing Research Group (SEARG) meeting/conference/workshop/symposium, and it was rather good.

SEARG (which appropriately enough, is Gaelic for ‘to dry, wither, fade, wane or decay’, and is pronounced ‘sherreg’), began in 2008, with aim of getting together people who work on senescence in Scotland, and who have an evolutionary/ecological background. That the meeting is clearly not exclusively Scottish any more is not really important, because this year’s meeting, in its eighth year, stuck to a similar format: around forty people; a few talks; lots of discussion; plenty of questions; long lunch breaks; the pub.

Even for such a small meeting, the subjects of the talks were wide-ranging. We kicked off with talks about dietary restriction and ageing. Until the recent past, research focused on the premise that fewer calories meant a slower metabolism and therefore slower ageing, research is increasingly focusing on how diet composition can influence ageing. The approaches and aims of the four talks in this section varied widely. Josh Moatt (Edinburgh) looked at how protein-to-lipid ratio in stickleback diets affected fitness traits such as maturation rate, clutch size and survival. Cara Green (Aberdeen) showed that liver metabolite expression varied with diet as a linear function across a gradient of different diets, using data from an enormous cross-disciplinary experiment on mice. Karine Salin (Glasgow) showed that trout with higher oxygen consumption had lower production of harmful metabolites called reactive oxygen species (ROS), which went against previous findings from in vitro studies. Finally, Satomi Miwa (Newcastle) showed that mice with restricted diets maintained liver metabolic rate and showed slow increases in ROS production with age, while fully-fed mice showed declines in liver metabolism and fast increases in ROS production.

The second session was devoted to telomere biology, which has been enthusiastically adopted by evolutionary ecologists as a measure of age-independent senescence processes. Telomeres are short repeated sequences at the caps of chromosomes which protect coding DNA from degradation during replication, but which shorten each time the chromosome is replicated. When it reaches a critical length, the cell becomes senescent. Essentially, short telomeres are associated with lower survival probability, independently of age: a study of Alpine swifts found that telomere length (below, top- dark squares are longest telomere lengths; grey circles are the shortest) was a better predictor of survival than was age (below, bottom). 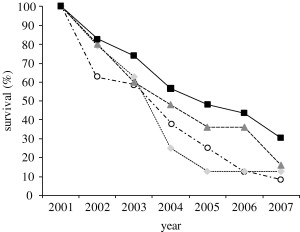 Anyway, it’s a really interesting area of research in evolutionary ecology, and a good place to start is Pat Monaghan’s work on a variety of species. Again, we had a real variety of talks. Emma Wood (Exeter) showed how an interplay between reproduction, oxidative stress, and the body’s anti-oxidant defences influenced telomere shortening in sparrow weavers. Luise Seeker’s (Edinburgh) talk was more technical and highlighted how different DNA extraction methods can affect the analysis of telomere length- this really highlights how important it is to carefully test assays when moving them from lab animals or humans and applying them to wild animals.

Finally, we had a couple of more broad-scale talks related to testing evolutionary theory. I presented some new work (hopefully out soon…) on variation in ageing rates of different traits in Soay sheep, and how this fits with evolutionary theories of ageing (not very well, it turns out!). Axel Kowald (Newcastle) finished by ruminating on the importance of studies in the wild for evolutionary theories of ageing. Original theories about ageing were developed on the assumption that ageing didn’t occur in wild animals, because they were all eaten/starved/diseased before they could get old enough to age, but since we know now that animals do indeed age in the wild, we need to re-evaluate these theories.

This stimulated a discussion it was a pleasure to listen to, led by people who have contributed an enormous amount to work on the evolutionary ecology of senescence, like Tom Kirkwood and Pat Monaghan. A huge advantage of small meetings is that they offer the opportunity to contribute to these discussions: at large conferences it can be difficult to grab more than a brief introduction to more eminent scientists (referred to in hushed tones as ‘the grown-ups’), but at a meeting of forty people, it’s very easy to be involved in group discussions and chat to everyone individually over coffee (tea!) and lunch.

In short, all hail what I’ve decided to now refer to as smeetings/smonferences/smorkshops/smymposia, and here’s hoping next year’s SEARG is just as good.